How Kansas Compares to the Nation’s Public Schools on NAEP

The 2017 NAEP results were made available this week, so many are digging through the data to try and make sense of what it might tell us.  This article is another attempt to do just that.

There are student subgroups worth investigating, such as students eligible for free or reduced-price lunch versus those who are not eligible.  Though this article focuses on all students, further analysis may delve into these subgroups.

The following graph shows the difference in mean scores between Kansas and the nation’s public schools on the four exams. 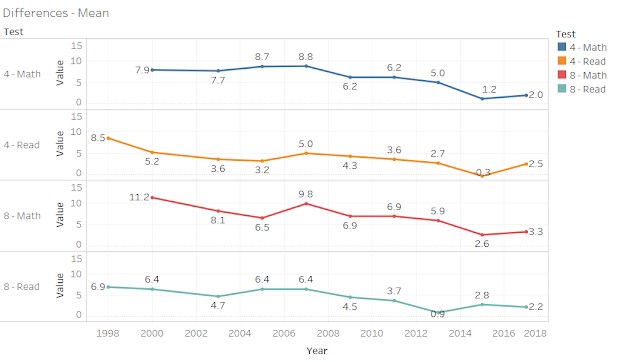 This data suggests that though Kansas has been “losing it’s lead” on the nation for several years, this trend may be reversing as of the 2017 results in terms of mean (average) scores.

Percent at Basic or Above

The following graph shows the difference in the percent of students performing at Basic or above between Kansas and the nation’s public schools on the four exams. 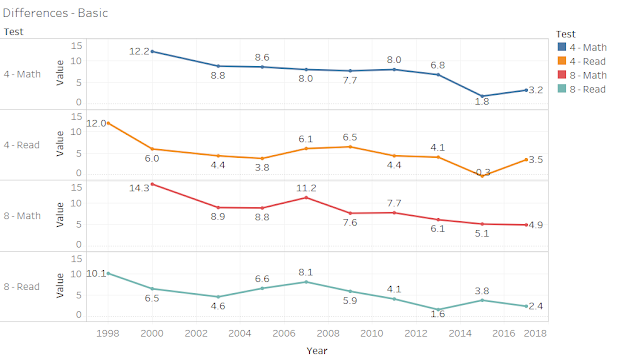 Similar to the mean scores, this data shows that the percent of Kansas public school students performing at Basic or above has been consistently above the national percentage (except for 4th grade reading in 2015), but Kansas’ lead has been declining since at least 2009.

For 4th grade, the number of percentage points above the national percent increased from 2015 to 2017, suggesting a reversal in the trend.  For 8th grade, Kansas’ lead decreased slightly for Math, and more noticeably for Reading.

Percent at Proficient or Above

The following graph shows the difference in the percent of students performing at Proficient or above between Kansas and the nation’s public schools on the four exams. 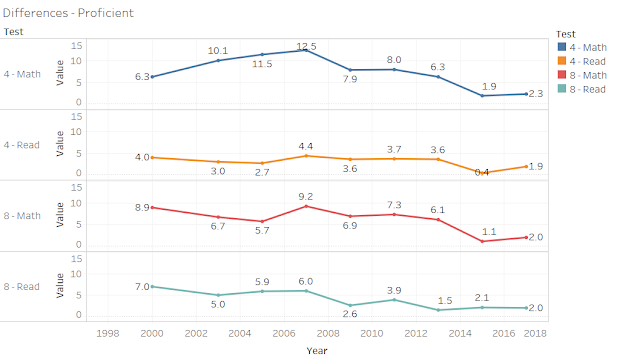 As with the other two metrics, the percent of Kansas students performing at or above Proficient has been consistently higher than the percent of public school students nationally.  The number of percentage points above the national average has been generally on the decline since 2005.

However, for 4th and 8th grade math and 4th grade reading, the number of percentage points above the national average increased for Kansas public schools, and the 8th grade reading number declined only slightly.

This brief analysis suggests that the last decade has seen a change in the performance of Kansas public school students when compared to public school students nationwide, with Kansas students continuing to outperform the nation, but losing their lead in each subsequent testing year.  However, the 2017 data suggest that there may be a change in this trend, with Kansas students starting to push ahead further than their peers in other states to a greater extent than in 2015.

With new funding for Kansas public schools, we can only hope that this new trend continues.