KSDE recently released the 2016 state assessment results on their new Data Central data page (http://datacentral.ksde.org/).  KASB has taken that data and placed it into a new interactive tool for members and others to use.  The tool (which can be found here: https://public.tableau.com/views/KSDE_Assessments/Overview) allows users to filter by program year (2015 or 2016), district, school building, student group (by race, free/reduced lunch status, etc.), subject, and grade level.

The following is a high-level analysis of the 2016 data including some trends and things to watch for.

Taking this all together, we can see that the Kansas Education System needs to address the needs of the students performing at Levels One and Two if we want to prepare students for success after graduation whether or not they plan any form of postsecondary education.

The data can be examined in much more detail using the tool noted above.  For our purposes, we will look at the difference in performance by grade level, by National School Lunch Program participation status, and by Race/Ethnicity.

The data by grade level shows some notable trends.

For both language and math, there are higher percentages of students performing at level four in the earlier grades, suggesting the number of students exceeding expectations decreases as they move through the system.

The percentage of students performing below grade level (Level One) remains fairly consistent for ELA, but shows a large increase for MATH in the higher grades. 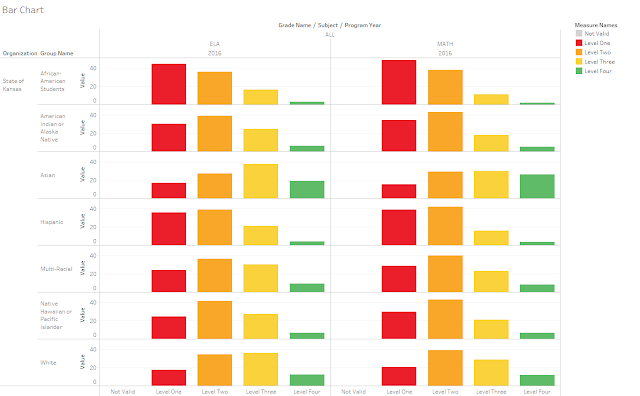 This suggests that race and ethnicity are still strong predictors of student success in Kansas, meaning more attention needs to be given to eliminating gaps based on these factors.

Be sure to check out the KASB assessment data tool to explore this data further.
Posted by Unknown at 10:08 AM