What a Tangled Web We Weave

One of the key debates in education is whether there is a causal relationship between education funding and student outcomes.  As I've discussed in previous posts, this is something that you can't really "prove" using statistics.  In this post, I want to expand on that by illustrating the issue of multicollinearity.

Multicollinearity, according to Wikipedia, is "a phenomenon in which two or more predictor variables in a multiple regression model are highly correlated, meaning that one can be linearly predicted from the others with a substantial degree of accuracy... the issue of multicollinearity arises when there is an approximate linear relationship among two or more independent variables."

So, aside from the limitations in the statistics themselves, which are only able to say whether two variables tend to move together (correlation) or whether movement in one can predict movement in another (regression), our ability to identify patterns is further complicated when the things we are using to predict are highly related to one another. 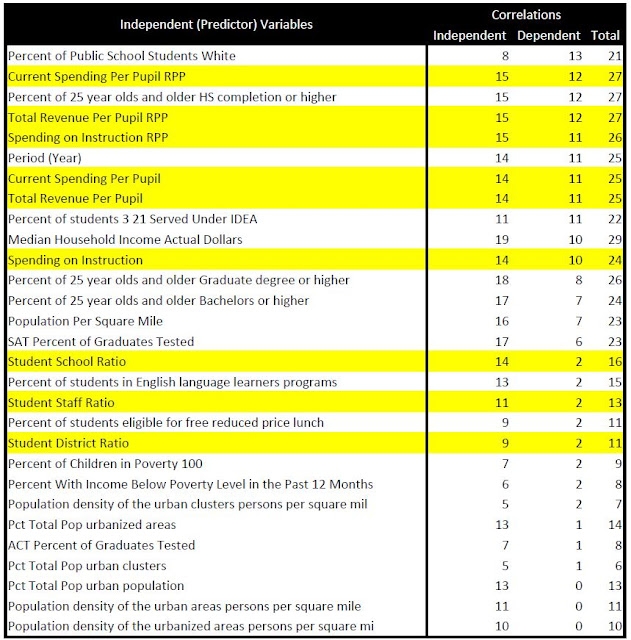 The variables in the table are sorted based on how many of the dependent variables (student outcomes) with which each one is correlated.  As you can see, the spending variables rank pretty highly out of those which are at least in part under the control of the education system (highlighted in yellow).

This means that education spending tends to move with student outcomes more consistently than some things like the percent of children in poverty.  (To see more details on the actual correlation coefficients, click here.)

However, you will see that these funding variables are also significantly correlated with many of the other independent (predictor) variables.  For example, the table shows that The Current Spending Per Pupil RPP (state-cost-of-living adjusted) variable is significantly correlated with 15 of the independent variables.  They are:
* Indicates a negative correlation, where an increase in one variable is accompanied by a decrease in the other.

In fact, there were only six independent variables with which Current spending per pupil RPP was not correlated, and these were census population distribution variables that were only available for one year.  This means that, even though we call them "independent" variables, they are anything but.  We have to look at them in the context of all the other factors that impact student outcomes.

Nonetheless, note that there is very little on the list that we can impact directly.  The only variables that we can directly change are those related to school funding, and those related to district, school, and classroom size.  KASB has been asserting that more funding is related to better outcomes.  Others have suggested that too much money is being spent on administration, and that larger districts are the answer.  The correlations support the former theory, but actually show that larger districts are associated with lower student outcomes.


The KASB Research Department will continue to examine this data and provide analysis and perspectives to inform the ongoing debate.