There is a lot of discussion in Kansas these days about the number of administrators versus the number of teachers and other instructional staff in the public school system.  Some argue that we are spending too much money on non-instructional staff, and that resources should be shifted to have more folks interacting with students and less folks sitting behind desks in offices.

John Heim, KASB's Executive Director, raised the question of what kind of ratios between managers and non-management employees exist in other industries, and how these ratios compare to the ratios between educational administration and instructional staff.

Looking to national numbers, the Bureau of Labor Statistics' "May 2013 National Occupational Employment and Wage Estimates" for the US gives us information on the number of management and non-management employees that we can use to compare.

The dataset does not draw direct connections between the manager and non-manager job classifications it provides, but working from the titles, we can determine ratios for some of the major categories included, as shown in the following table: 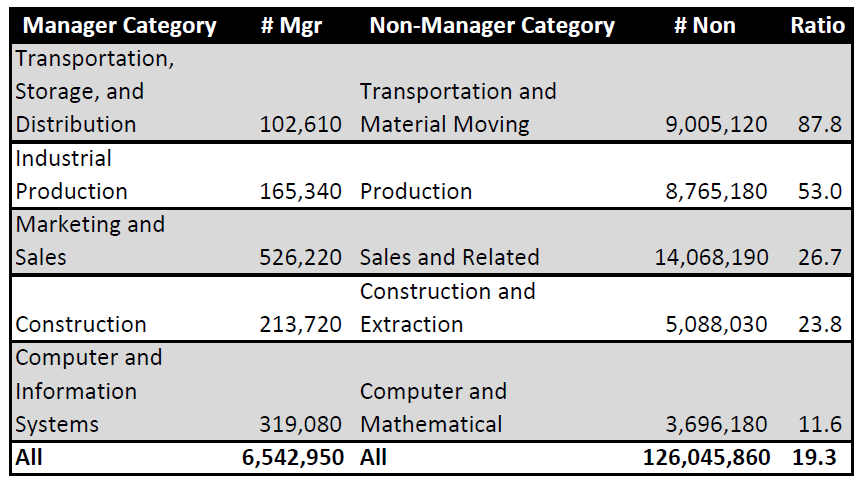 As can be seen, this is quite a range; from as few as 11 employees per manager to as many as 88.  Further analysis and potentially discussion with the Department of Labor and the Bureau of Labor statistics would be needed to come up with meaningful and consistent manager to employee ratios, but the table above at least illustrates that there is a wide variation in the number of managers needed to supervise employees, and it further suggests that the nature of the work being done determines (at least in part) the number of supervisors (or administrators) necessary.

However, what about all of the staff that are neither instructional staff nor administrators?  What about the library media specialists, school counselors, clinical/school psychologists, nurses, speech pathologists, audiologists, social workers, administrative assistants, food service workers, coaching assistants, security officers, clerical staff, and others?  Do they not also require supervision?  If we add them to our equation, we find the ratio of administrators to all staff was approximately 16 staff per administrator in 2013-14.

What can we conclude from all of this?  The main thing I would conclude is that more research and evaluation is needed to determine how the management needs and approaches for public schools are the same and how they are different than the management needs and approaches in different industries.  That being said, we can also conclude that Kansas public school administrators are responsible for, on average, a slightly lower number of employees than the national average across industries for manager to employee ratios.

The following graph and table show the number of Kansas Public School Employees (by FTE) classified as Supervisors/ Managers/ Administrators, instructional staff, and other staff. 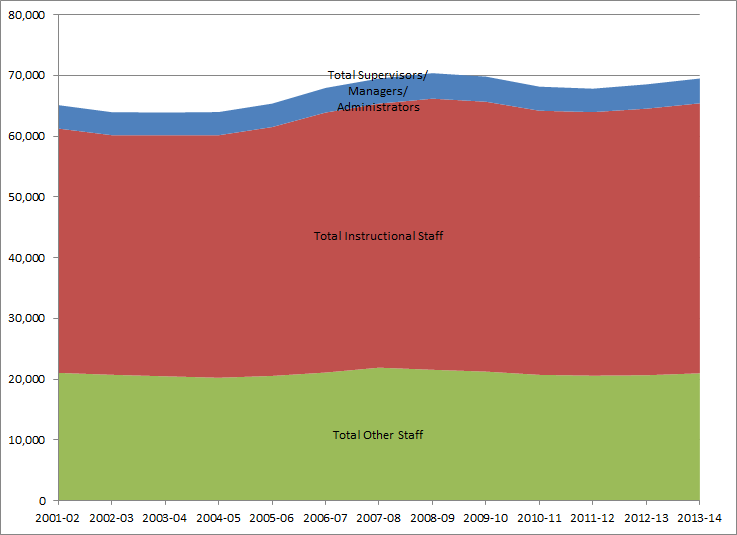 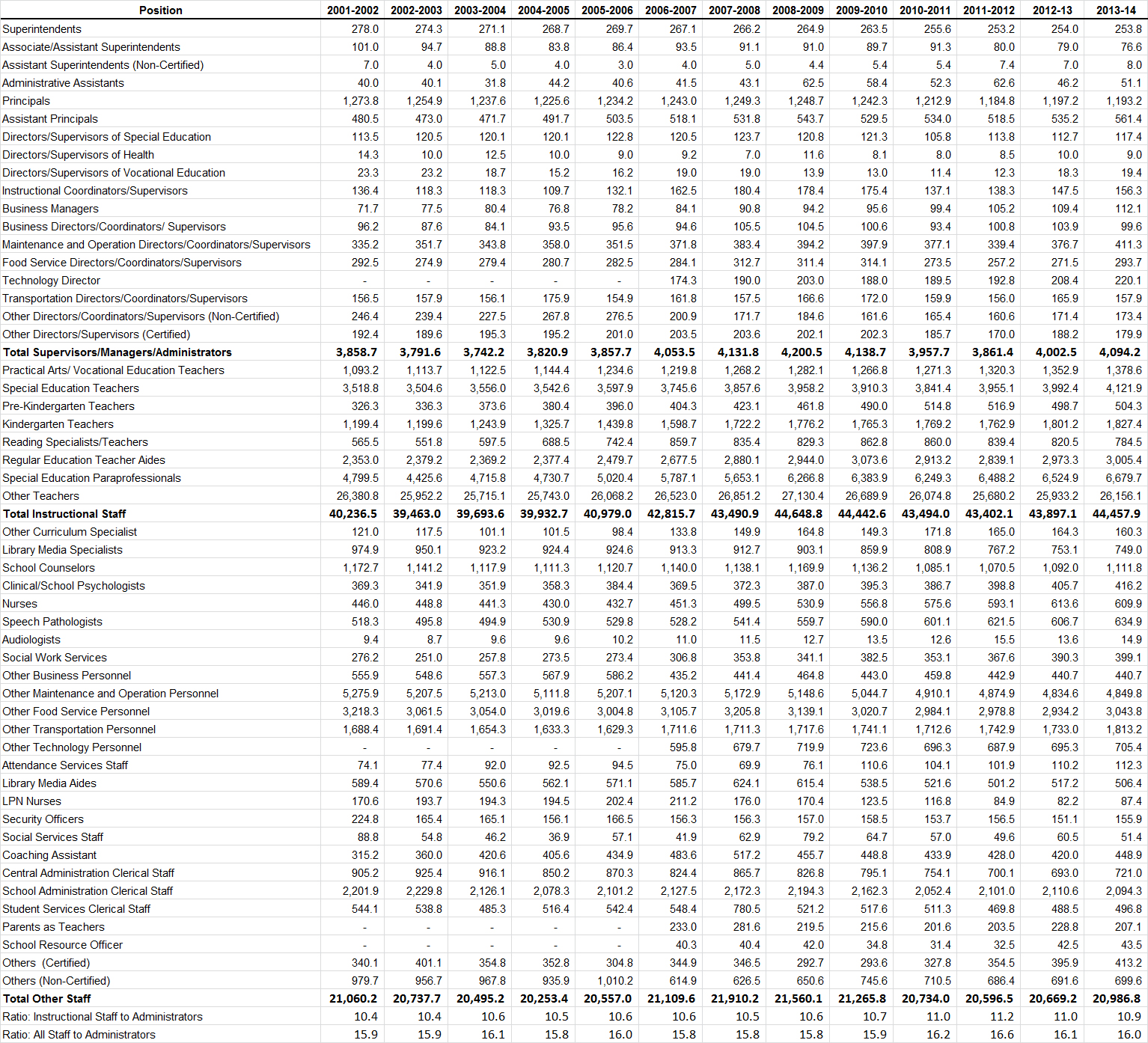 Next, we’ll talk specifically about the ratio of managers to teachers; both nationally and in Kansas.  The Bureau’s estimates show the following information related to educators and their managers: 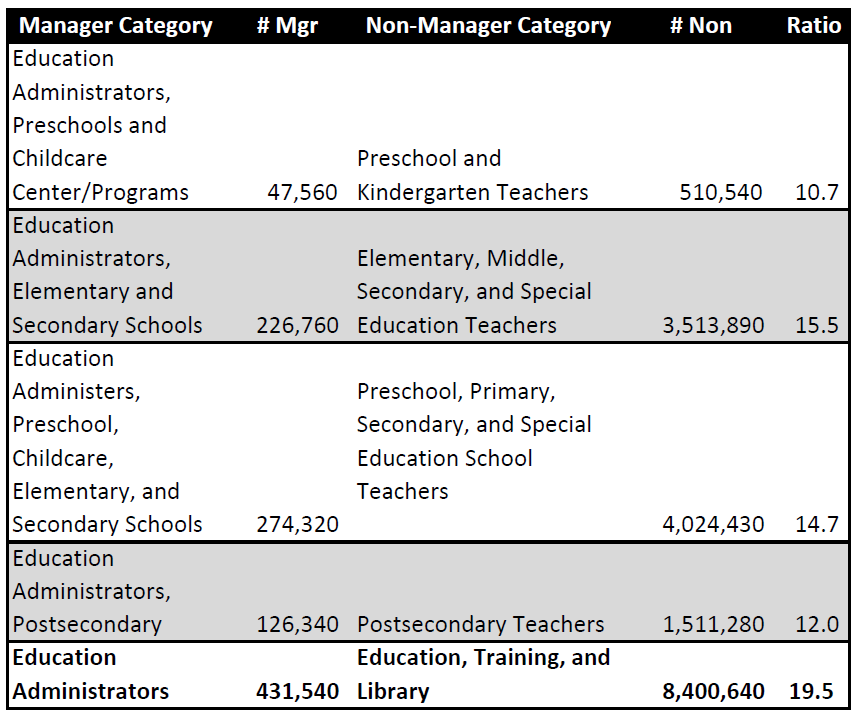 This means that at the primary and secondary levels, the national ratio of teachers to administrators is about 15 to 1.  In Kansas, if we look at the ratio of administrators to instructional staff, we find a ratio of approximately 11 to 1 for 2013-14.  This ratio increased gradually from 2001-02 through 2011-12, then declined gradually from then through 2013-14; as the following graph illustrates. 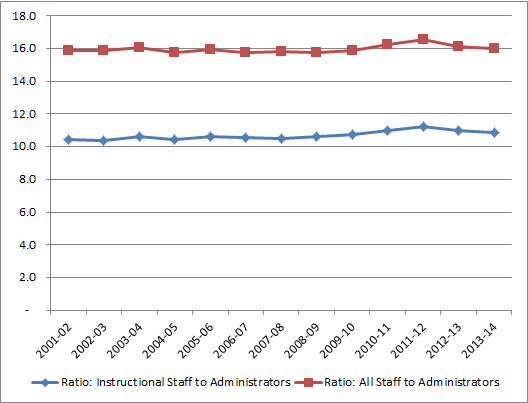 What can we take from this comparison?  I would say two main things.

The first is that if we assume the national numbers only include instructional staff, then Kansas has fewer teachers per administrator than the national average, but if you instead assume the national numbers include all staff, then Kansas has on average more staff per administrator than the national average.  Further analysis of the definitions used by the Department of Labor suggests that more than just certified teachers are included in their counts, however it is not clear if their counts include all of the job categories we have included in the “All Staff” group for Kansas.

The second is that, despite claims made by some that the number of non-instructional staff in Kansas schools has been growing at an inflated rate in recent years; the ratio of these management positions to the non-management positions has remained substantially consistent over the past decade.