Poverty in Kansas - How Are We Doing?

A colleague of mine shared this report from Oklahoma related to poverty and household income, and asked me if there was anything similar available for Kansas.  I told her that aside from the report KASB did recently about at-risk funding and poverty, there wasn't much to be found out there, so I decided to do some brief analysis myself.

Based on data obtained from the US Census Bureau, I found that, thought the percent of the Kansas population at or below the poverty level is fairly consistent over time, the percent of students enrolled in grades K-12 is increasing, as shown in the following graph: 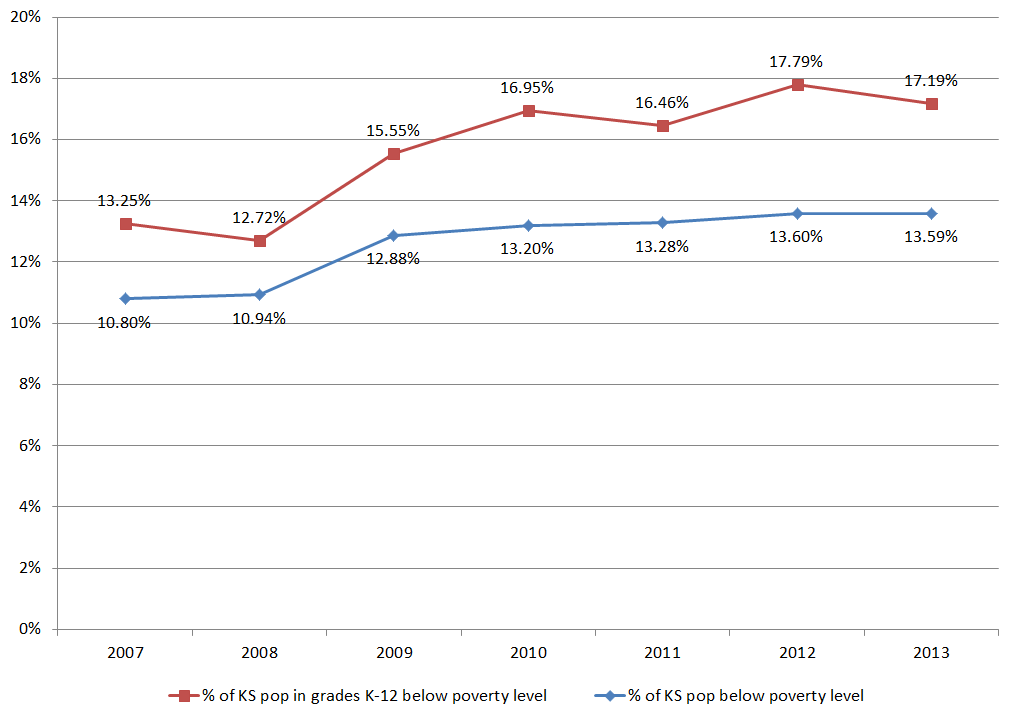 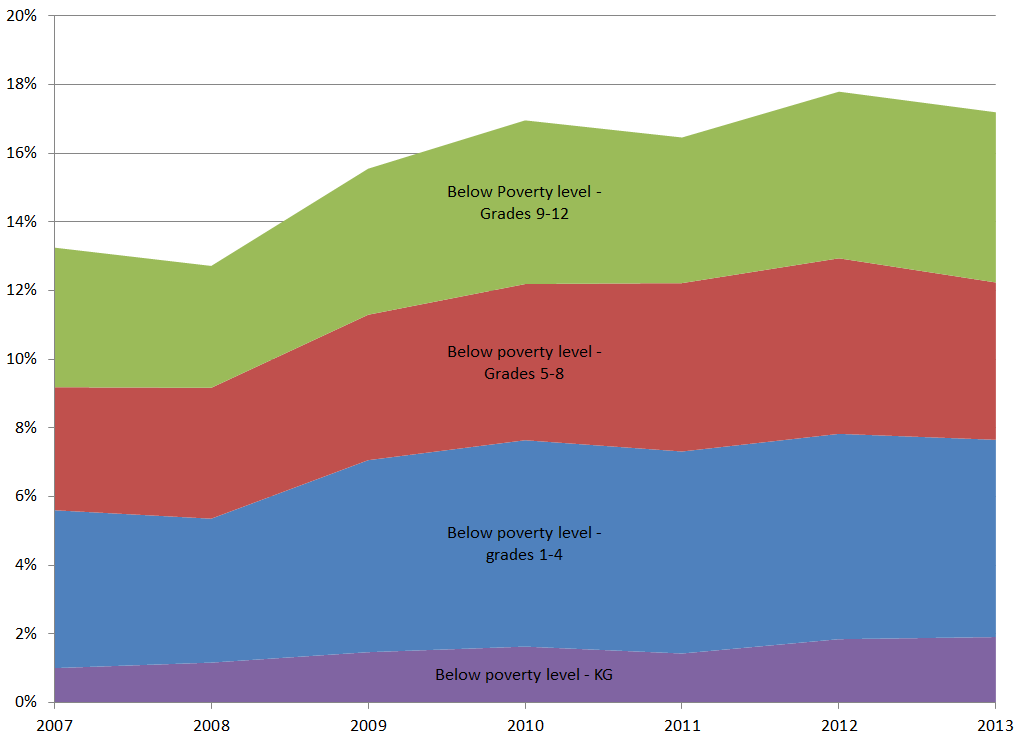 It would appear the largest growth in the percent of the school population below poverty would be in the 1st through 4th grade group, and that the largest increase in poverty in recent years happened between the 2008 and 2009 calendar years.

So, the number of school-aged children in poverty has been increasing.  What about family income in general?  How are families in Kansas doing?  Again going to the Census Bureau, I looked at Household income for families, and found the following: 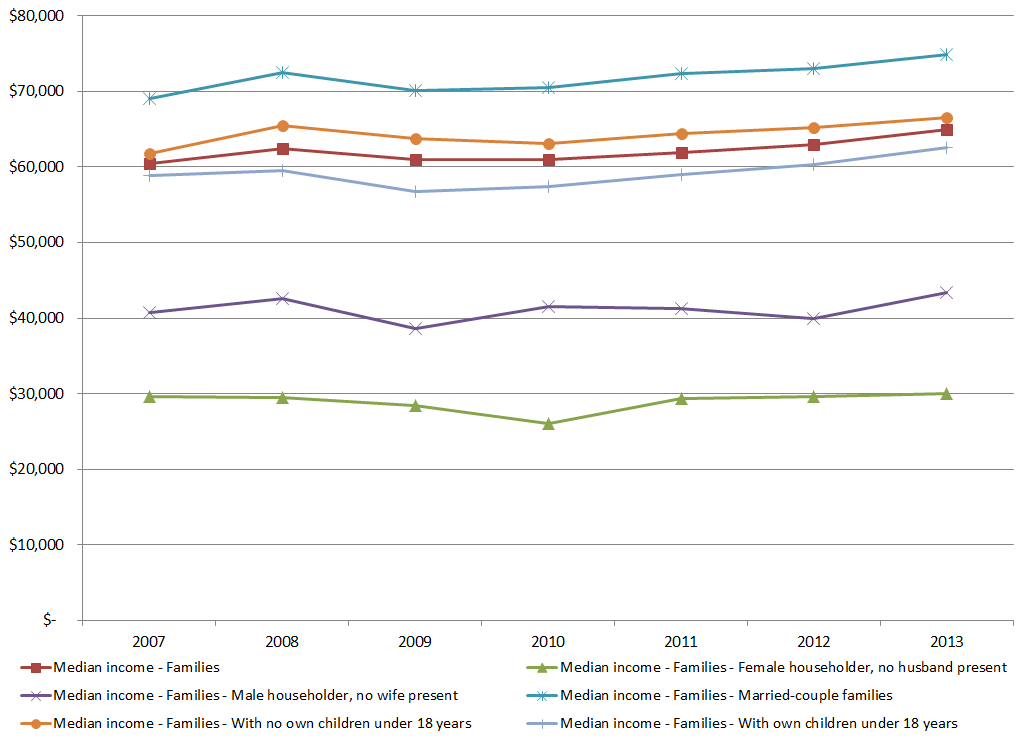 That doesn't look too bad, right?  Family incomes overall have been seeing their median income increasing since 2009 or so, with the possible exception of female householders with no husband present; which have remained fairly level aside from a bit of a dip in 2009-2010 and male householders with no wife present; which have seen a less consistent pattern but remain level overall.

However, when looking at dollar amounts over time, it is always important to consider inflation.  Looking at these same amounts reported in 2013 inflation-adjusted dollars, we see this: 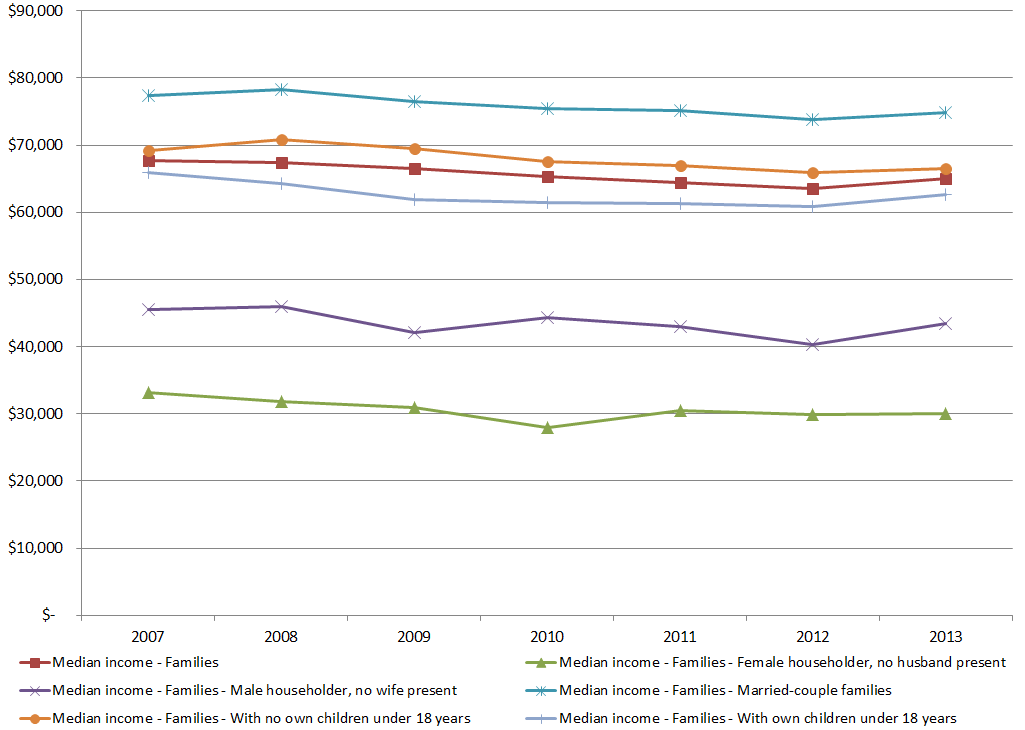 Based on this data, inflation-adjusted median family incomes decreased in Kansas between 2007 and 2012, then started to show some increases between 2012 and 2013.

There are a lot of discussions and debates going on right now about the overall prosperity of Kansans and more specifically in the education world about the future for Kansas students.  This data suggests the road ahead will be more difficult rather than easier, and indicates we need to work harder to find good solutions in the light of more students coming to our schools who don't have the financial stability that their predecessors had.

KASB will work on further analysis to look at these trends over longer periods of time and also to look at factors such as parent level of education, urbanicity, and various demographic characteristics and their impact on poverty and income.