In this post, we will respond to some of the assertions/statements made in a Topeka Capital Journal blog entry from Sunday, August 10th entitled “Taxpayer-focused perspective on K-12 staffing.”

Below are a few quotes from the blog that will be addressed specifically in order to provide additional information and considerations.  Note that the data used for this response can be found here.

First, it is important to note that the funding for a particular school/district would not change if the district decided to hire or fire an assistant superintendent.  The blog post is talking about allocation of existing resources; which speaks to efficiency but not to overall funding.

Second, note that there are no standard naming conventions for administrative staff within districts.  The certified staff list includes 26 different job titles and the non-certified includes 28, but the manual for completing these forms from KSDE does not include definitions for each position.  Here are the titles and frequencies from the Certified and Non-Certified counts that the blog post includes as "managers":

It is entirely possible that what one district calls a Director of Career and Tech Ed might be called the Associate Superintendent for Tech Ed in another district.  The title alone does not indicate what duties each staff person actually performs, or how similar positions with different titles can be from one district to the next.

Finally, we all should understand that no two districts are created equal; they are made up of different students, different communities, different sizes, and each have unique needs.  Dictating what titles staff at each of these districts can have is not a road to improved efficiency.  After all, what’s in a name?

Using District Total FTE, and including the titles from the table above as “Managers,” the average ratio across districts is 153.87 student FTEs to every 1.0 FTE for manager positions.  This is close to the value of 153 the blog post cited for the average district.  However, calculating an average of the student to manager ratios across district means that district size is not taken into account.  If you instead total all students in the state and divide them by all “managers” across districts in the state, you see a ratio of 201.82 student FTEs to every 1.0 FTE for manager positions.

If we look at the average ratio of student FTEs to manager FTEs based on total student population, we see the following: 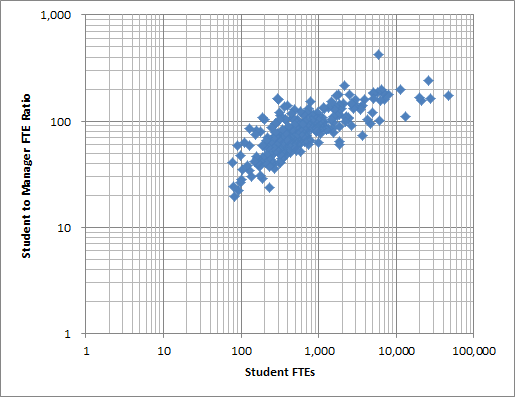 This data suggests that the average ratio of student FTEs to manager FTEs increases as district size increases.  This implies an economy of scale, with larger districts showing fewer managers per student than smaller districts.

However, it is important to note that in smaller districts it is very common for the managers to also serve other roles; from teacher to coach to bus driver to any number of other non-managerial functions.  This is less common in larger districts where more positions make it more possible to have clearer divisions of labor.  So, the lower ratio in smaller districts can be somewhat misleading, as these managers are also performing non-managerial duties that would be separate positions in larger districts.

Note that all buildings reported to KSDE are included in these calculation; not just traditional elementary, middle/junior, and high schools. 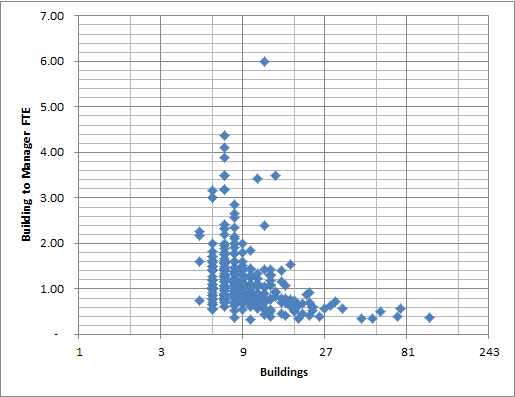 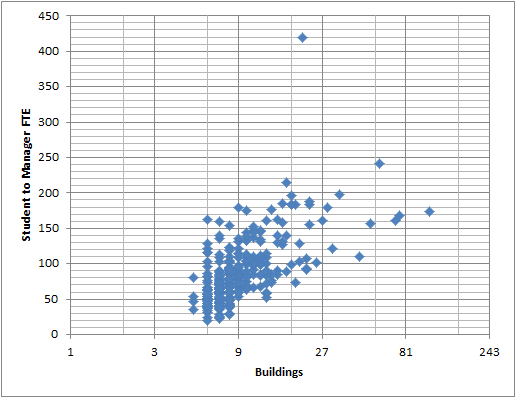 USD 322 has a Superintendent who also serves as a Principal, which is why they are reported for only .5 FTE; resulting in a ratio of 608 when their headcount only equals 304.  Because it is common for superintendents to also serve as principals in smaller districts, presenting a ratio of managers to students that excludes principals is problematic.

Based on the data for Kansas, the number of managers in a district has no measurable impact on assessment results.  Regression analysis was performed with the district student-manager ratios (including principals) as the independent variable and the average percent meeting standards or above on the state assessments as the dependent variable.  Results indicate there is no relationship between these two measures (p > .6, correlation = .03, percent at basic and above on KS state assessments averaged across reading and math for grades 3-8 and 11).

Does that mean the number of managers a district has doesn’t matter?  No, it does not mean that, but what it does mean is that a wide variety of other factors impact student achievement to the point that mathematically the number of managers per students cannot be used to predict student achievement.  These other factors include student teacher ratios, teacher quality, administrator quality, parental involvement, spending, and any number of others.

As noted above, there is wide variation the titles used for staff position and (particularly in smaller districts) it is common for a single staff person to “wear many hats.”  Focusing on the titles and their presence or absence in districts misses the point.  However, you will note that most of the specialized positions the blog post calls out on the bulleted lists are within larger districts, which as we discussed earlier are more likely to be able to have staff who can specialize in specific areas whereas staff in smaller districts are more likely to have to serve multiple roles.


In conclusion, we all agree that Kansas Schools should be empowered to run as efficiently as possible in order to maximize the value of the tax dollars going into the system and to maximize the success rates for the students coming out of it.  However, this is not going to be accomplished by following recommendations based on misinterpreted data in order to target changes that would likely have no impact on student outcomes.
Posted by Unknown at 11:44 AM